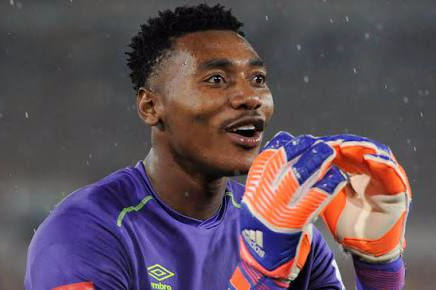 Baroka United FC goalkeeper, Oscarine Masuluke, will be representing Africa at the 2017 FIFA Awards in London next week. Masuluke was nominated for FIFA Puskas Award  (goal of the year) after his fantastic overhead kick goal against Orlando Pirates last season made the top 3 cut.

“My goal is the best because goalkeepers often score with penalties and headers. For a goalkeeper to score a goal like that, it happens once in a lifetime.” Masuluke told Soccer Laduma radio.

Despite losing out to Simphiwe Tshabalala in the PSL Awards earlier this year, Masuluke’s wonder goal has been making waves across the globe.

“Although I was hurt, and I knew I deserved to win. But I’m not blaming anyone, I won’t blame PSL or Kaizer Chiefs because people  voted for Simphiwe Tshabalala.” Said Masuluke on Soccer Laduma radio.

International football legends such as JJ Okocha and Roberto Di Matteo, have dubbed Masuluke’s goal as the world’s best in 2016 and vowed that the 24-year-old deserves to win in London.

“I’ve never been to overseas before, the only places I often go to is Durban and Capetown, this will be my first time.” He said.

The top three FIFA Puskas Award Nominees are as follows.

This is a text widget. The Text Widget allows you to add text or HTML to your sidebar. You can use a text widget to display text, links, images, HTML, or a combination of these. Edit them in the Widget section of the Customizer.